I've been really bad about updating my blog lately.  Been pretty busy with some gigs as well as some stuff of my own.  Over the next week or so I'll try to get this place up to date.  But first I'll dispense with one of the more recent events and also one of the more unique events of late.

So this guy named Gurj emails me like a month ago and starts a back and forth over several weeks.  He wants to propose to his girlfriend Neetu and he wants to do it in a special way.  His plan?  To hire me to pose as a street artist so the two of them can ask me to draw their caricature.  Meanwhile why they pose for the drawing I'm not just drawing them in any old pose, I'm drawing Gurj down on one knee in front of her with a talking bubble exclaiming the words, "Neetu, will you marry me?!"

The back and forth of emails was to figure out the details as you probably already guessed.  Location, day, time.  One major problem is I'm not actually a street artist so I don't have a busker's license.  I was a little worried about that because if I looked too much the part I could grab unwanted attention by nearby vendors who don't want me there or even the police.  My story would've probably saved me from any real legal trouble but my cover would be blown and the whole scenario would be wrecked.  On top of that I also didn't want other people lining up to get their drawings done before they got there...I didn't really think that would happen but hey you never know.  So the plan was for me to be a little more inconspicuous, just a guy drawing on the street who, when Gurj expressed interest, would offer a caricature and we'd be off and running.

The whole thing went down outside Rogers Arena near the box office where Gurj had told Neetu he needed to pick up tickets left for him by a friend.  In the meantime I was there drawing so they'd have reason to approach me when they showed up.  Gurj asked if I could be in the middle of a caricature, so that's what I did although in the end I don't think it mattered.  I didn't have any reference and there weren't any faces around me that I could get a very clear look at so I stuck with what I could maybe do from memory.  First, Groucho Marx.  Then a grizzled old Arnold Schwarzenegger.  I'm not crazy about the Arnold drawing but I do like the idea of drawing him all grizzled and geiserly so I might take another shot at that with some reference and a bit more time to play with it. 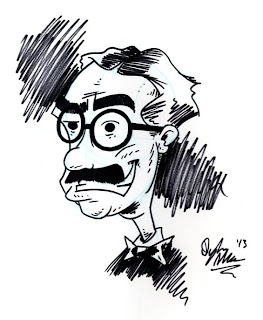 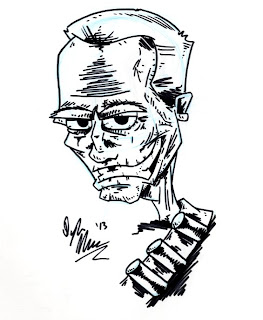 Next up of course was the main event and Gurj set up a camera for it.  He told Neetu he was trying to enter a Vancouver video contest or something.
She said yes!  I don't think she quite knew what to make of the drawing at first, I think it was just starting to sink in when she turned around and saw her now fiancee on one knee.  I think she thought maybe I'd drawn him proposing to her just to be cute, but then how would I have known her name?  That last question may have even creeped her out for a second before she realized what was going on.  Here's a photo of the two of them with their drawing.  It's a little out of focus.  You can see a better shot of the drawing at the end of the video. 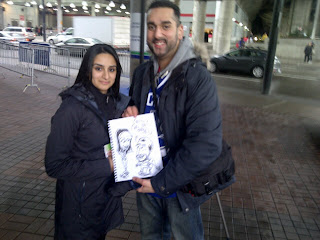