It seems like every time I post on my blog I start by stating how regretful I am that I haven't been updating my blog often enough.  And as I start writing this entry it occurs to me that I haven't been updating my blog often enough.  Weird huh?  The reason for this is that I haven't been updating my blog often enough.  I'm not gonna spit out promises that this will change because despite my best efforts I can't promise I'll be able to up my post frequency.  The fact of the matter is I just forget and neglect really often.  I have Twitter, Facebook, Tumblr and Deviant Art...I'm a bit better about posting art work and random ramblings over there but on Blogger I like to write more stuff to go with my post...which then leads to procrastinating and ultimately forgetting.  So if you want to see regular, more constant stuff from me, follow me on any of those other places I mentioned but continue to follow me here because I will keep it going as best as I can.  In fact if you're reading this the day that I posted it...I might even post again tomorrow.  WHOA!

At the start of the summer I had some art in a local art gallery in Vancouver.  The gallery's called Hot Art Wet City.  The show was a tribute to movies from 1984.  The title of this post suddenly makes more sense now doesn't it?  No?  Well then google that shit and get back to me.

I don't very often submit art to gallery shows.  Mostly cuz I'm busy on other projects and by the time I hear about a show I might want to be involved in I don't have time to do anything for it.  The timing by sheer luck for this one worked out.  I heard about the show with lots of time to come up with something.  I'm a huge movie geek and I was born in '84 so it would've been almost sacrilegious to ignore this particular show.  Turns out all that time was actually maddening though.  I couldn't decide for the longest time what movie I wanted to reference.  The first movie that came to mind was Ghostbusters which has been among my favorites since I could talk, but the problem there was that it's the favorite of so many people I figured for sure there'd be tons of Ghostbuster entries.  I decided I wanted to do a mash up of a bunch of different movies of '84 but I couldn't come up with a design I was happy with.  I finally thought I had it and then stopped drawing when I hit the half way point...I just wasn't liking it.  I decided I was over thinking the whole thing and just did a Ghostbusters poster anyway.  Here it is. 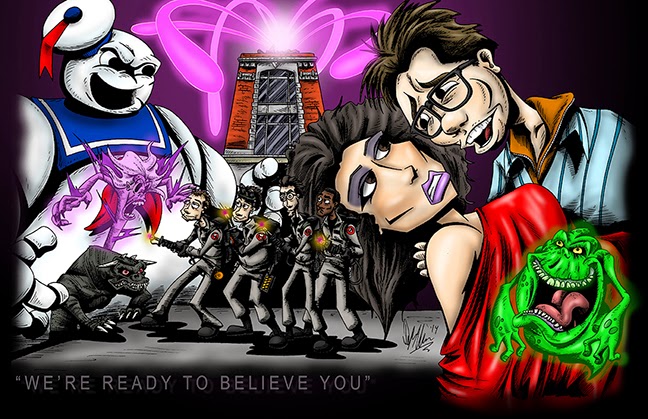 Aaaand then I also did this Toxic Avenger one.  Largely cuz I thought it would be fun cuz I like drawing monsters and stuff but strangely don't do it that often.  The Toxic Avenger has a special place in my heart and yet I've never actually seen the movie.  There was a short lived Saturday morning cartoon based on the franchise called The Toxic Crusader.  Being a fan of the cartoon my dad suggested we rent the movie; he'd never seen it himself.  When we found it in the video store it had a special sticker on the cover warning of the graphic content of the movie.  Dad shrugged it off cuz I'd grown up on horror movies and wasn't easily shaken.  When we pressed play on the movie we were greeted by two...count em...two on screen warnings about the graphic content of the film.  I think my dad was starting to have second thoughts at this point but we still decided to stick it out.  That is until the first scene concluded with a pack of wild teenagers running over a little kid on his tricycle and then backing up over his head.  Evidently I looked a little freaked out and we stopped the movie.  In the years since growing up to the desensitized individual who's writing this I haven't come across the movie to watch it again.  But mark my words...one day I will see this movie and its several sequels. 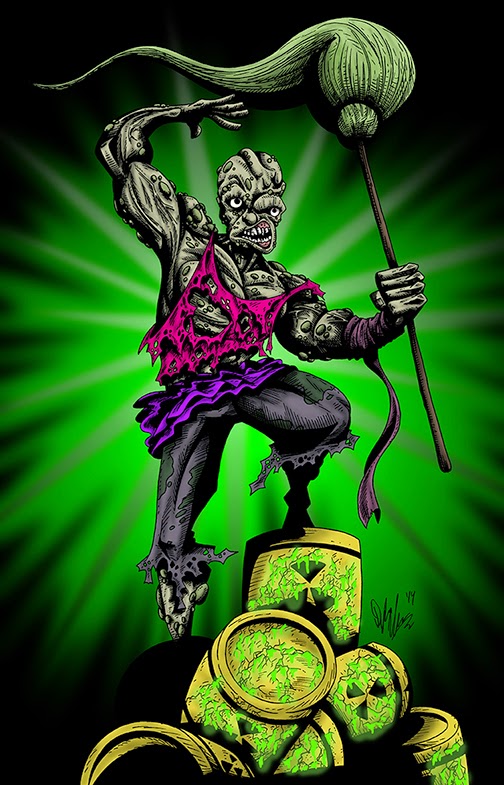