Last week I finished off a summer of teaching.  I teach Flash animation once a week at Vancouver Film School, which I'll be picking back up again in a couple weeks, but in addition to that I also taught classical animation at the Port Moody Art Centre for ages 9-12 this summer, that may also pick up again as a once a week after school class in the fall, along with a claymation class.  But most of my summer teaching was done at Koko's Activity Centre, also in Port Moody.  Koko's offers two classes a day along with plenty of play time so parents can drop them there for the whole day if they want.  At Koko's I taught Claymation and Comics and Cartooning for 5-12 year olds.  There's a big difference between teaching 9-12 year olds at the Art Centre and teaching 18-25 year olds at Vancouver Film School.  But there's an even bigger difference between teaching 9-12 year olds at the Art Centre and teaching 5-12 year olds at Koko's.  Most of these kids were on the younger side and not all of them were necassarily interested in animation or drawing or at least not for a 3 hour stretch.  5 year olds have enough energy to put the Energizer Bunny out of work...in fact I don't know how it hasn't happened yet(or maybe it has, I haven't seen that bunny in a while).  I can only assume bribery is at play.  The world's energy crisis could be solved if scientists devoted more time to harnessing this power.  One day it will happen...but maybe not in our life times.

Anyways, some times I had a whole whack of kids and was against the ropes the entire class.  I spent a lot of time drawing custom stuff for the kids to colour if they weren't too into drawing themselves, I cranked out a lot of drawings that way actually.  Other days there though, wouldn't be as many kids and I'd actually have a chance to just sit with them and draw myself.  Here's a comic I started drawing on the first day of Comics and Cartooning.  I didn't get too far... 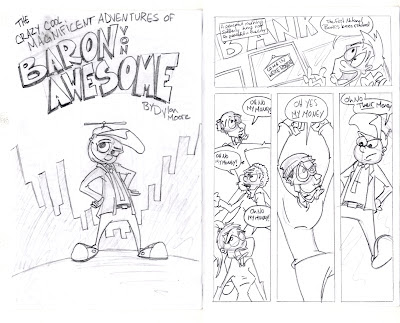 I thought by the end of that first week I'd actually have a complete comic...but that didn't happen.

Here's some random doodles I did one day. 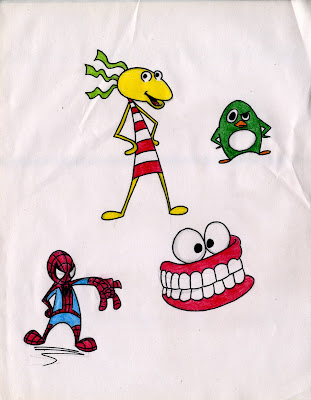 That yellow dude with the green hair is Koko himself.  Or my take on him anyway.  They actually shot a live action Bananas in Pajamas style TV pilot with Koko as the main character and they got me to do a couple of the voices.  I won't get into that now though.  That Spider-Man drawing was inspired by a kid that apparently came to the afternoon classes dressed as Spider-Man...I always missed him.

Here's some sculpting I did one day during the claymation class when the kids were actually managing to keep themselves busy.  This is what happens when I'm bored. 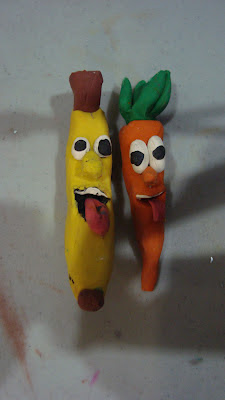 These got a good laugh from the kids, and one of them actually used these guys in his movie.

One sunny day I actually had no kids at all.  I got some work done on my laptop but when the battery died I dug up some art supplies from the back and doodled some more.  Here's an okay drawing of Batman. 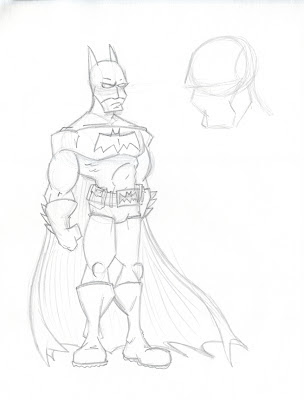 I was starting to draw a close up of his head when I got word that I was free to go.  At that point there obviously wasn't gonna be any late comers.  I actually drew a really cartoony version of Batman for one of the kids that I really liked, but they brought that one home.

Anyway, that's what I was able to walk away with from my time at Koko's this summer.  These and some paychecks, but I'm not gonna scan and post those.  Teaching's fun...glad to have a bit of a break though.  Now I can catch up on some other stuff.
Posted by Dylan at 18:42 No comments: