A few years ago I had some ideas for what I thought would've been a pretty cool animated version of "A Christmas Carol."  I even did some sketches for it, then a week or two later I saw the trailer for Robert Zemeckis' mocap version and that was pretty much the end of that.  His take on it wasn't that much like mine but it was close enough, it was mocap, that alone is too close to animation.  These aren't the original sketches I did for it, I still have them somewhere but I drew these last night after having watched "Muppets Christmas Carol" and "Scrooged" over the last couple weeks and getting kinda inspired.  Here's Scrooge and the Cratchets: 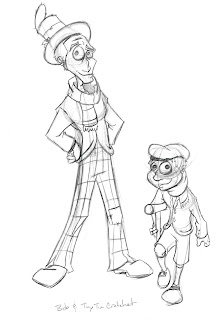 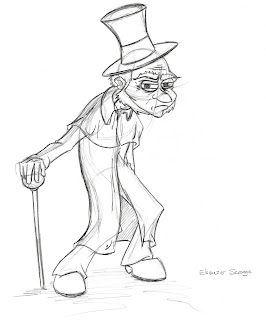 I really like Bob Cratchet here but I think Tiny Tim could use some work.  I like Scrooge too but I could push him a lot further, he's not miserly enough for my liking.  Here's Jacob Marley: 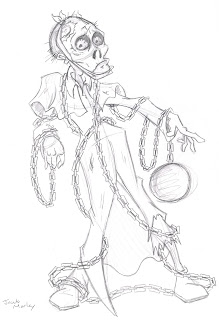 I like where I'm heading with Jacob here...going for more of a zombie idea, but again I think I could push it more...could do something more creative with the chains too.  One idea I had when I was first starting that actually was in Zemeckis' version was Marley's jaw dropping from his face when he takes the bandage off, they played it more for laughs though where as I was thinking it'd be more creepy, maybe funny too, but in a more sick and twisted sort of way.  And of course the real stars are the ghosts of past, present and future: 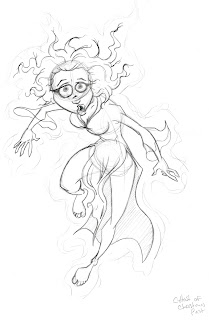 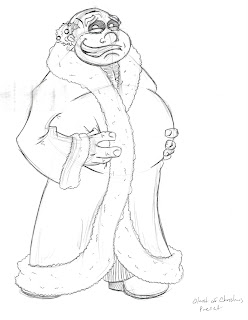 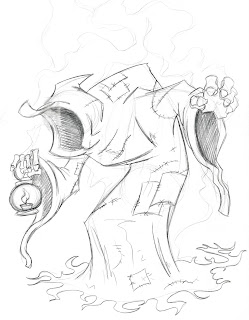 I really like all three of these drawings actually, but if I was ever going to actually pursue this I'd probably experiment a lot more...in animation it's sort of a waste to keep characters like these too grounded in reality, these could all conceivably be played by actors and where's the fun in that.  I doubt I ever would've really had the chance to pursue my version of A Christmas Carol anyway, it was just something fun to think about.  I did like Robert Zemeckis movie though...
Posted by Dylan at 12:26 1 comment:

New Trailer for "The Case of the Midnight Murderer"

No new drawings or anything but I might as well post the new trailer for the movie.  Just uploaded it this morning!

Email ThisBlogThis!Share to TwitterShare to FacebookShare to Pinterest
Labels: "The Case of the Midnight Murderer", animation, trailer

Welcome to the Outhouse

I don't know what's taken me so long to get into blogging.  It seems so natural for a cartoonist...it's the perfect place to post and share stuff.  I can't make excuses...but I can tell you that I've recently gotten addicted to the blogs of a ton and half of talented artists and that more than anything is what has finally made me start.  Actually, I'm lying to you already...this isn't actually my first blog...a couple weeks ago I started a webcomic and I decided do it in blog form, it's called Cowman, you can check it out here.  That's the last time you'll catch me in a lie though, I promise.  I'm making the 'scout's honour' hand signal right now, I was never a scout though, so I can't be sure I'm doing it right.  See.  Honesty. 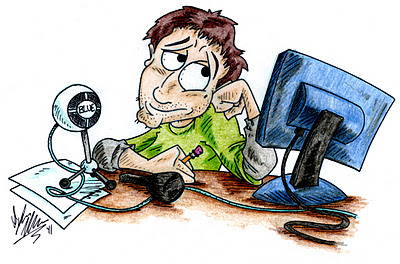 I can also tell you that I've been keeping pretty busy.  I'm a freelance animator and cartoonist and a few years ago I decided to attempt the impossible and make a feature length animated movie called "The Case of the Midnight Murderer," which as you may assume has eaten up a lot of my time.  Cowman was something I started whenever I needed a break from that project in order to keep myself sane.  One annoying habit I've had my entire life though is consuming myself with projects like that and not giving myself enough time to doodle.  You come up with some pretty cool stuff when you just let yourself riff on a piece of paper and I'm hoping this blog will help encourage me to do more of that.  I get inspired sometimes to draw something that looks great in my head and then just don't take the time to do it because I keep my plate so full all the time.  Well this movie of mine is almost finished folks so I'm hoping to make up for some lost drawing.  I'm working on sound mixing the flick right now so it might take me a while to start posting with any regularity but it should happen.  I'll be making an effort anyway!  And dammit I'm gonna have some fun too!  In the meantime here's a behind the scenes Newsreel of myself at Outhouse Cartoons:
Posted by Dylan at 23:12 No comments: