You've Got Red On You

Shaun of the Dead is probably my favorite zombie movie of recent years. 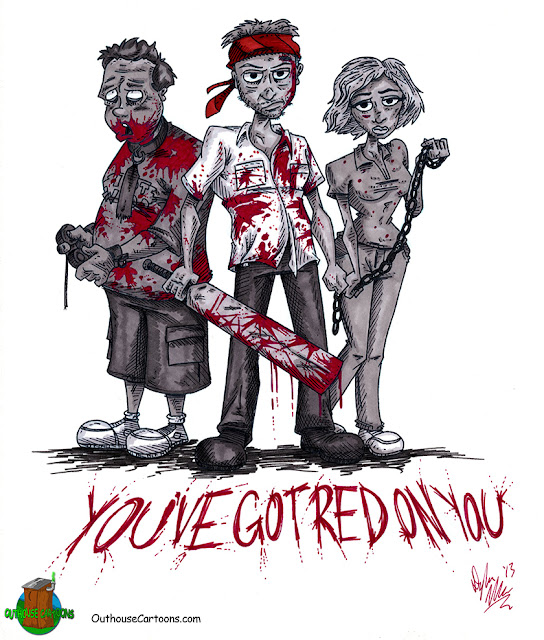 George A. Romero's original 'Night of the Living Dead' from 1968 is still probably the scariest zombie flick.  Others have been fun but not as creepy.  And there've been a lot of them.  So 'Shaun of the Dead' stands out of the pack, a comedy with horror overtones instead of a horror movie with comedic overtones.  The movie's hilarious but manages to be scary at times too.  Zombie's in general at the moment stand out of the pack, in a time when Vampires and Werewolves are getting their teeth pulled and their six-packs exposed, someone decided horror should be romantic, but it's a lot harder to put sparkles on a zombie.  Earlier this year they did try with 'Warm Bodies' though...so the zombie thing might be wearing a little thin now too.  Even if every incarnation is good in it's own right you can definitely have too much of a good thing but 'Shaun' beat a lot of them to the punch and rightfully so.  As you may have guessed, I rewatched it recently and drew this a couple days later.  Done with markers and red Uniball.
Posted by Dylan at 08:50 No comments:

I actually drew this not long after the last couple that I posted but I'm just now getting around to posting it on the blog. 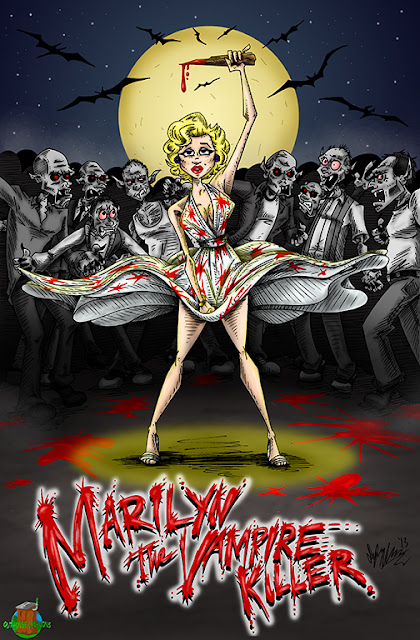 The idea for this actually goes back quite a ways.  I was brain storming a bunch of cool poster ideas one night a few years ago and this was by far one of my favourites to come out of that.  I was distracted at the time though, trying to finish animation on my movie and ultimately forgot about it until something reminded me recently, so here it is.  I can't remember if there was any specific inspiration that lead to this idea at the time, I just remember thinking it would be a really cool image.  And I still think it is.  The idea originally was just to have her in front of a solid colour background but I decided just before drawing it that I wanted to add some vampires.  They were gonna be recognizable movie vampires at first but I couldn't decide on which ones to use since I didn't wanna have her with more modern movie vampires, considering she died in the 60's and that greatly narrowed my options so I went with my own vampires.  Keeping them black and white was a last minute idea too.  I remembered reading somewhere that once Marilyn made it big, part of her contract was that she would only appear in colour films.  The only exception that I know of that was ever made was 'Some Like It Hot' because the makeup they used to make Jack Lemmon and Tony Curtis look like women was much more convincing in a black and white image.  So I thought having Marilyn be the only colour...er almost...in an otherwise black and white picture would be cool.  So there it is.  Sometime soon I wanna set up on some website and sell some prints...this'll definitely be one of them. 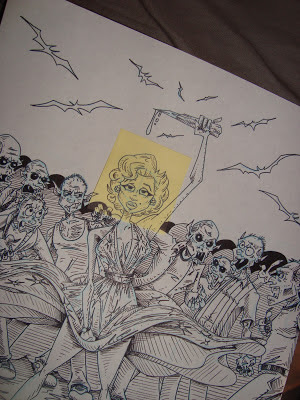 I didn't like the way I'd originally drawn her face so I stuck a post-it note on the paper and used my light table to draw a new one.  Tricks of the trade.
Posted by Dylan at 11:26 No comments: