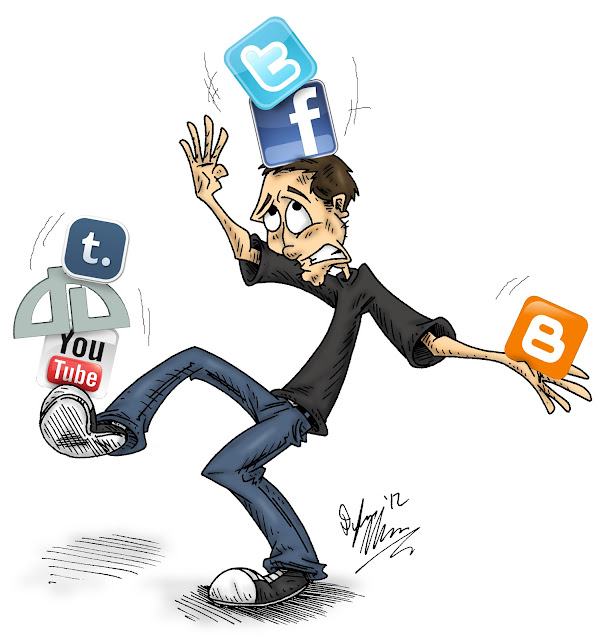 One of the biggest things for any kind of artist is getting your stuff seen by people.  That used to be pretty much impossible to pull off unless you were lucky or had an agent or something to book appearances and gallery shows.  That was back when you had to wear a beret and a smock at all times so that people knew you were an artist.  In today's world that means the internet, and everything that comes with it.  You can only hold out for so long when a new Social Networking site crops up before jumping on the bandwagon.  Truth be told I actually have some fun with all of these sites.  YouTube lets me post my animation for the world to see.  I like writing and ranting on Blogger.  I like looking at art of all kinds on Deviant Art.  I like posting rapid project updates and smart ass commentary on Twitter.  I like the reach of Facebook and keeping it active with stuff.  And Tumblr...well I'm new to Tumblr but I'm sure I'll have fun with it too.  There's just so many of them!  And I'm sure there's more to come too.  Here they are if you wanna check out, or join or follow or what not.

And while I'm at it too.  You can also follow my twice weekly webcomic, "Cowman" via Blogger here.  And become a fan of my film, "The Case of the Midnight Murderer" on Facebook here.
Posted by Dylan at 09:48 No comments:

I'm a 007 fan, as many people are.  This year marks not only the release of the 23rd Bond film but the 50th birthday of the James Bond film franchise and as a result the character and the movies have been discussed a lot lately.  I'm even set to help my photographer friend, Brad of BWD Photography with a Bond tribute photo shoot.  All this stuff coalesced and I drew this poster you see here. 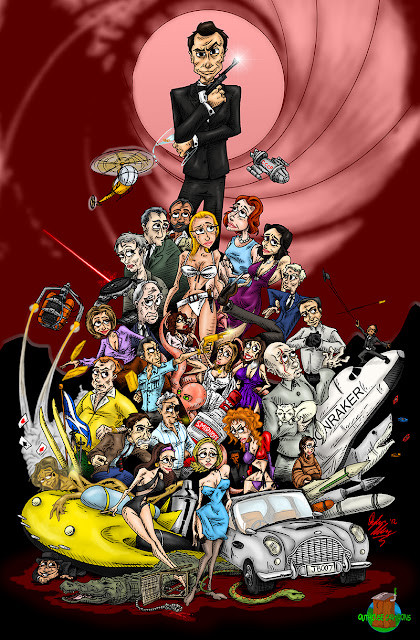 When I envisioned this thing I got pretty excited but it was a little bittersweet.  I had to move a project I've been struggling to get rolling on to the back burner to do this.  Sometimes you have to take advantage of an idea while it's fresh or you won't do it all.  Can you spot and name all the stuff?  I won't do all the work for you but here's a list of everything included in this poster.  See if you can find it all.  Don't be afraid to imdb if you have to, but try to do it without.

"Here's to swimmin' with bowlegged women."

Show me the way to go home.  I'm tired and I wanna go to bed.  I had a little drink about an hour ago and it's gone straight to my head.

Jaws is one of my favourite all time movies.  And Quint is one of my all time favourite movie characters.  And his portrayal by Robert Shaw may also be one of the best all time performances.  His Indianapolis speech is a work of art both as a performance and a piece of screenwriting.  A speech that was apparently rewritten and reworked more times than the famously buggy mechanical shark named Bruce.  The story goes that Shaw himself rewrote the monologue before filming the scene.

37 years later and Bruce the shark still looks fake as hell.  But the movie is so well written, directed and acted that you still don't care.  It'll always be one of the best.  I rewatched it for the 8 billionth time a couple weeks ago and I drew this afterward. 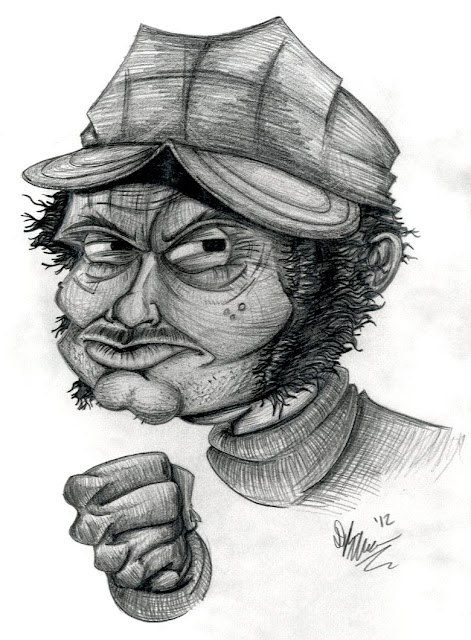 So...eleven hundred men go into the water.  Three hundred and sixteen come out and the shark took the rest.  June 29th, 1945.  Anyway we delivered the bomb...
Posted by Dylan at 15:41 No comments:

A couple weeks ago I was trying to decide on a movie to watch.  I can't remember exactly what was on when I turned on the TV but it was annoying so I changed the channel to something while I was thinking about film choices.  I ended up flipping to PBS' broadcast of Ellen Degeneres receiving the Mark Twain Prize for humour.  My intent was to just watch 5 minutes while I looked at the PVR but I ended up watching the whole damn 90 minutes.  It was hilarious.
So anyway, I drew this the next day.  Just got around to colouring it.  I've always liked Ellen anyway, but I had been thinking about watching an action movie or something bloody...so the fact that a PBS award ceremony stole my attention is pretty damn impressive. 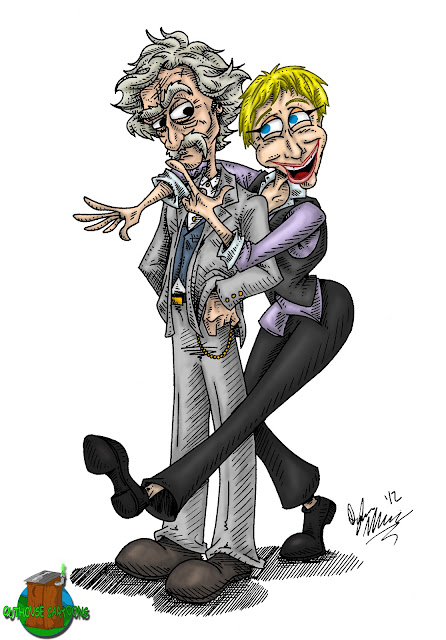 Mark Twain himself didn't actually attend the ceremony  which I thought was kinda douchey of him.
Posted by Dylan at 09:46 No comments: