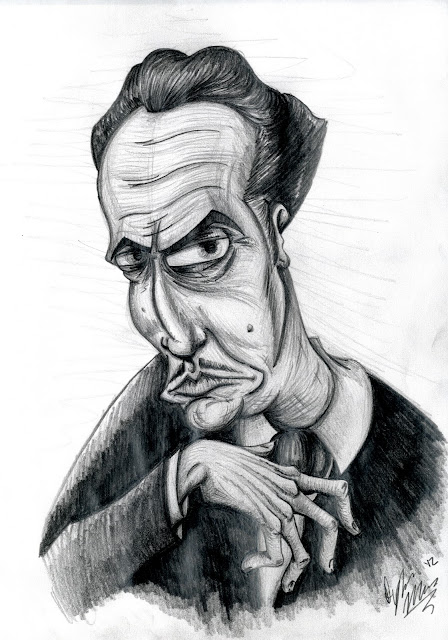 Vincent Price was a cool guy, and underrated comically too.  Have you ever seen "His Kind of Woman" with Robert Mitchum and Jane Russell?  I don't love the movie, but it's not bad and Vincent plays Jane's clueless husband in it, he's hilarious and the best part of the movie.  A far cry from the more ghoulish roles that he was most famous for throughout his career.  He also voiced one of my favorite all time Disney characters, Ratigan from "The Great Mouse Detective."  He's a big mean and nasty looking rat with this flamboyant Vincent Price personality.  Awesome.  The ghoulish stuff is cool though too, I love those old B-horror and sci-fi flicks.
I like drawing caricatures but I don't do it too often and I've been wanting to change that.  I also realized I don't very often do fully rendered pencil sketches any more so I got it in my head to tackle both with this drawing.  Here're some of the quick sketches I did to get the ball rolling: 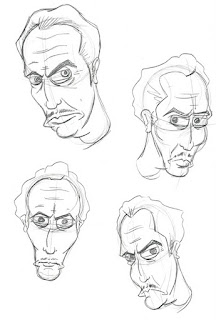 Here's the latest poster for 'The Case of the Midnight Murderer.' 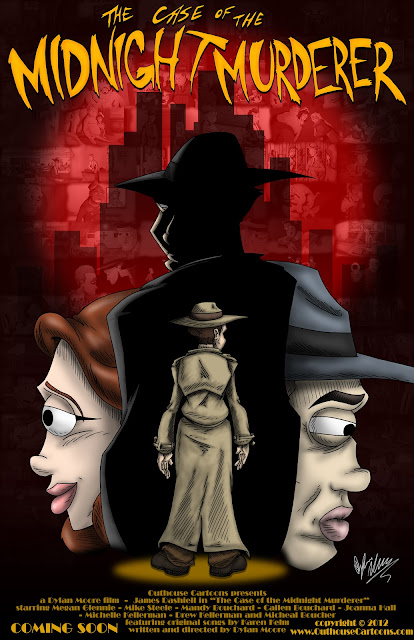 I really like how this turned out but I kinda procrastinated over finishing it for a long time cuz I wasn't sure if the idea was actually gonna work or not.  Half the poster was reliant on blending in frames from the movie and until it was done it was a little hard visualize properly.  I thought it'd be fun to post some of the steps I took to make it. 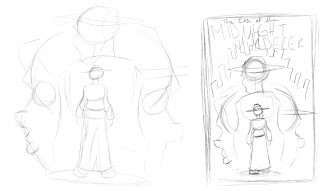 I started with these thumbnails which is always a good place to start.  Problem is you should really be doing a whole whack of these things and then picking the best one or mix and matching the best parts from them all.  I had this idea for Dash, Milda, Sam and the killer...I was gonna fill in the rest of the poster with other characters but before I even tried I got the idea to use stills from the film and that was the end of that.  Here's the drawing in progress... 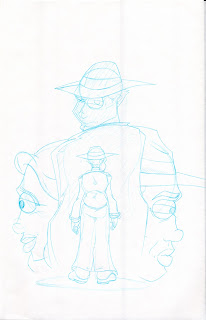 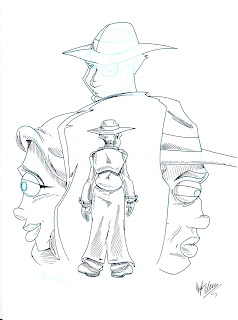 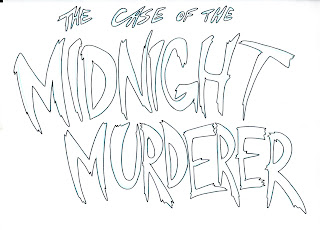 You can see I changed my mind on how the title would stretch across the page...mainly to allow space for the stills...which came in after colouring: 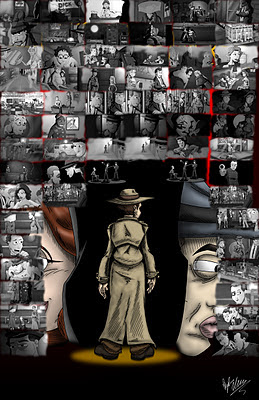 I laid out all the frames on top and then moved them to a lower layer under the faded cityscape and the spotlight, then dropped the opacity to like 30% so the red would come through.  I'm quite happy with how it came out but I'd never tried an effect like this before so I was worried the whole time that it was gonna look too cluttered and busy.  But anyway, there it is.  If you want to download a wallpaper version for your desktop you can do that at the official website.
Posted by Dylan at 13:18 No comments:

Email ThisBlogThis!Share to TwitterShare to FacebookShare to Pinterest
Labels: "The Case of the Midnight Murderer", movie, poster 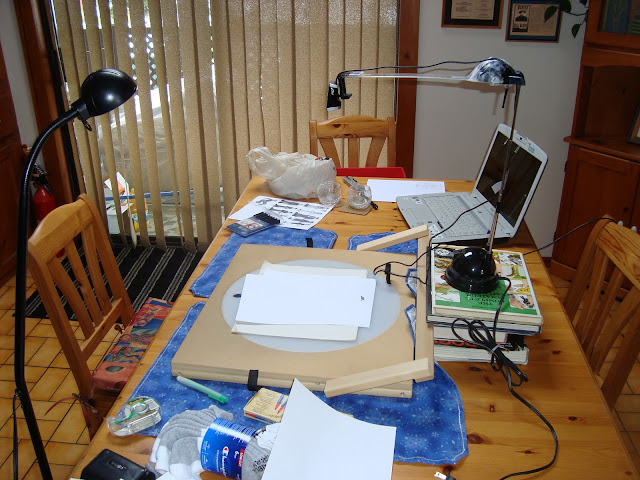 If you can't tell that's a bedside table lamp with a ruler stuck to it using about half a roll of scotch tape, with a webcam stuck to the end of that with another quarter of a roll of scotch tape, plugged into a laptop and sitting on top of a stack of coffee table books over top of a collapsed animation table.   And yes, if you're curious that's a also a package of socks on the table.  Not for any particular reason.  They're just there and I'm strangely proud of the fact that they made it into the photograph.  Believe it or not, this is actually a drastic step up from the death trap I had rigged up a couple days before this but unfortunately I never thought to take a picture.  That one had the same webcam taped to a floor lamp that balanced on a plastic crate and hung over my shoulder to film me drawing on that same animation table, set up properly on the kitchen bar.  I could barely move without knocking something over or getting tangled in a cord...it's a miracle I survived, but here I am to tell the tale.  I had camera trouble that day and the footage I walked away with was pretty much unusable, hence the opportunity to figure out this beautiful setup you see before you.  The result is now on youtube, and here's the drawing I did:

I was using markers that I hadn't used in a while and of course they decided to die while the camera was rolling.  You can probably see how streaky the marker job on this drawing is...I would usually have the chance to clean that up while shading with the other markers but the other ones died too.  It sorta makes me cringe but it was fun to do anyway and the videos kinda cool.  Here's the video by the way:
Gotta love that digital watch, hey?  I'd like to do more videos like this...I even bought a new box of markers today(50 bucks by the way, jeez), but as you can imagine it's kinda a pain to hook up that camera in that way with any regularity so I'm gonna need to figure something better out for future.  The drawing from beginning to end took about 45 minutes and I sped it up to 8 minutes.  The unsped version features a lot of complaining about those damn markers.
Posted by Dylan at 16:05 No comments:

Email ThisBlogThis!Share to TwitterShare to FacebookShare to Pinterest
Labels: "The Case of the Midnight Murderer", camera, drawing, video

The Girl With The Dragon Tattoo

Saw "The Girl With The Dragon Tattoo" a couple nights ago and drew this when I got home.  Didn't have a chance to colour till this morning though... 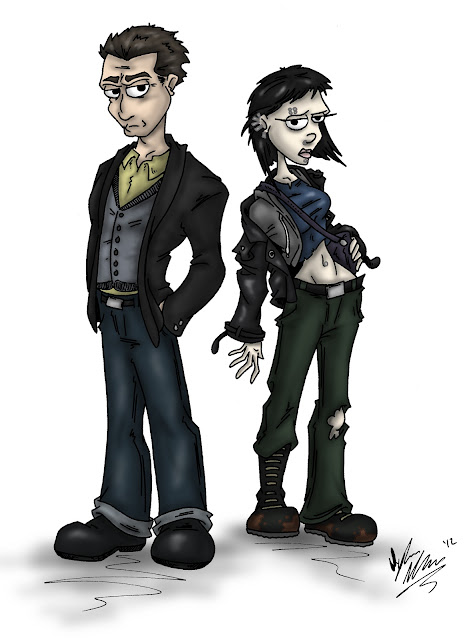 Mikeal Blomkvist and Lisbeth Salander.  These aren't based specifically on Daniel Craig and Rooney Mara, I drew it from memory using the movie and the book.  The movie was really well done and compares really favorably to the book...or at least I thought so.
Posted by Dylan at 10:34 No comments:

Email ThisBlogThis!Share to TwitterShare to FacebookShare to Pinterest
Labels: Girl With The Dragon Tattoo, movie 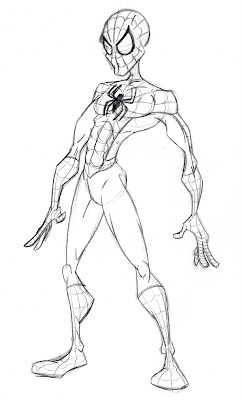 I got a Spider-Man coffee table book for Christmas.  "Why?" you may ask.  "Because I'm a geek," I might say.  The book as you would imagine is loaded with artwork of the character from days gone by and it got me in the mood to do my own take on him.  I've drawn Spider-Man a lot over the years as many kids did growing up so this isn't necessarily new ground for me but it's the first time I've really put my own distinct stamp on him and I kinda like it.  The long arms sort of happened by accident but it seems so appropriate for an arachnid, so I left it that way. 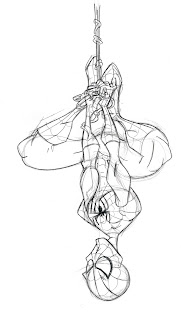 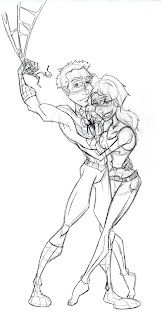 I did all of these fairly quick and they're kinda rough but I like em.  Maybe one day I'll do a properly rendered version or fully coloured one, that'd be cool.  I also did a bunch of quick gesture drawings.  If I was ever gonna draw a Spider-Man comic I think I'd need to put in a lot of practice on his posing to really do the character justice...he's so much cooler when he's contorted into those awkward poses.  I left these gesture drawings out on the table and my cousin immediately recognized them as Spider-Man without seeing the other drawings, I think that means I'm on the right track. 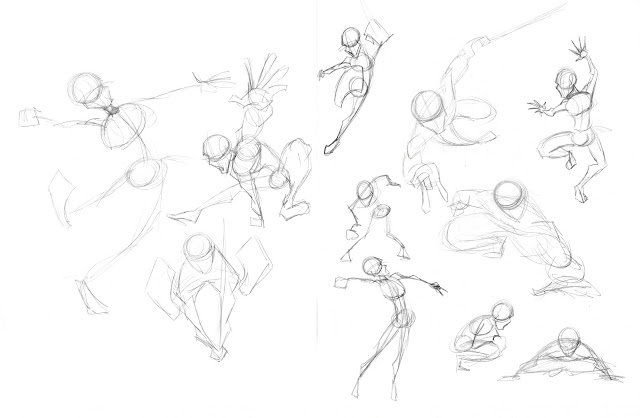