Right now I'm in a hotel room in the Fallbrook Country Inn, which is technically Bonsall apparently, which is just outside of Fallbrook, California, where the Midnight Murderer has made it's public debut. I'm sitting on the bed with an iPad and a keyboard like a 16 year old girl writing in her diary. I feel like shit. My immune system has been acting like the Terminator on steroids for the passed 6 months, keeping me healthy while everybody around me complained about the worst flu season in years. I guess I bragged about that a few too many times without touching wood because this morning I woke up with a sore throat. The rough dried out kind that hurts when you swollow but also feels like phlegm is making a constant migration down the back of it. I don't know how something can be both dry and wet at the same time but my throat found a way. It's very talented like that. I'm also breathing through a filter of snot which periodically feels like it's filling my sinus cavity at a compression of about 4,000 PSI. I'm burnt out. But in spite of that things are pretty cool. My movie, "The Case of the Midnight Murderer," was screened publically for the first time tonight...the turn out wasn't huge...but the response was pretty decent...or hell maybe the response was huge and I'm just chronically humble.

My own movie is the third film I've watched at the festival since I arrived in Fallbrook and the turn out has been about the same at all of them. The theater was just over a quarter full I'd say. As ticket sales go it's certainly nothing to brag about. None of these movies are boasting known actors and directors on their poster. None of them have major studios backing them or promoting them, they're just movies made by people who love movies, and my flick, a film-noir send up of 1940's detective mystery movies fit right in. The movie's a comedy and when you hear the audience laugh at the moments you intended them to you know you've done at least part of your job right. The festival coordinators and techs raved about the film to me and gave me some advice here and there which will come in handy on future projects as well as this. They praised the artwork and the imagination. Oh and did I mention the movie is award winning now?

Flashback to Saturday...before I came to Fallbrook and checked into this hotel. Before my throat woke me up and started yelling at me. On Saturday was the Canada International Film Festival in my hometown of Vancouver. "The Case of the Midnight Murderer" won me an award for 'Excellence in Filmmaking.' The movie wasn't screened there though...this is a tiny festival crammed into one day...they screen maybe a dozen movies if that and honour the others that impressed them with varying awards. Because they cram it all into one day though the awards aren't handed out until 10PM. My flight to California was 6AM the next morning. I was tired on Sunday. VERY tired. Fallbrook's Awards Gala was Sunday night...I was tired, but I was there. My film had been nominated for 'Best Animated Feature.' It was the only animated feature nominated. It was the only animated feature playing in the whole festival. I figured I was a shoein to win...the odds seemed to be in my favour...I had a gut instinct it was in the bag. I was right...I won...and although I loved the idea of calling my movie and myself award winning and as much as I'm gonna love seeing that pewter film reel next to my Canada Filmmaking certificate I wasn't sure the award could grant me any additional bragging rights when I had no competition, I was mostly just pumped that people were gonna get to watch the movie. Flash forward back to tonight as I was leaving the theater to head back to this here hotel room when one of the coordinators who was offering me tech advice let me know that the festival has never given an award for best animated feature before. It's never been a category. They created it for "The Case of the Midnight Murderer." So maybe I earned some bragging rights after all. Not that I'm going to. I do have a tendency to be chronically humble.

So now as Letterman delivers his monologue on the TV in front of me and my eyes grow heavier with every keystroke I'm ready to call it a night. Hopefully you'll get to see the movie some time in the near future if you haven't already. There's still some festivals that haven't made their decisions yet and some others still that I've yet to submit to. Then who knows...when way or another I'll get it out there. Stay tuned. 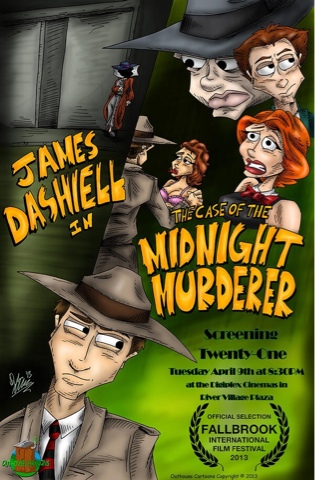 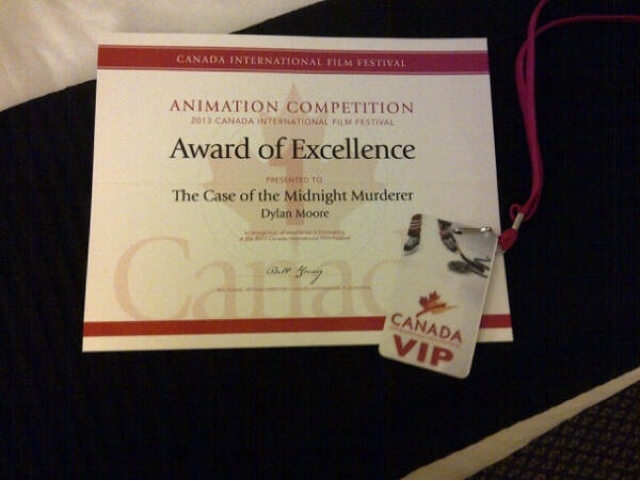 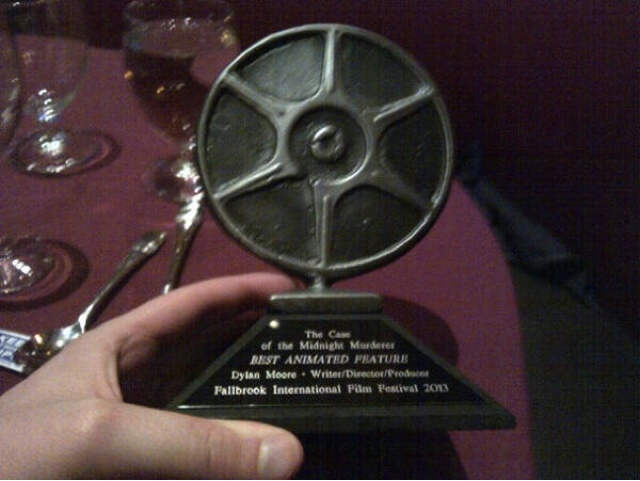