Prior to the blast of posts just prior to Christmas I was pretty bad about keeping this blog up to date.  But to those of you paying attention to my other outlets you may have noticed that I'm working on a new animated movie.  Here's the poster... 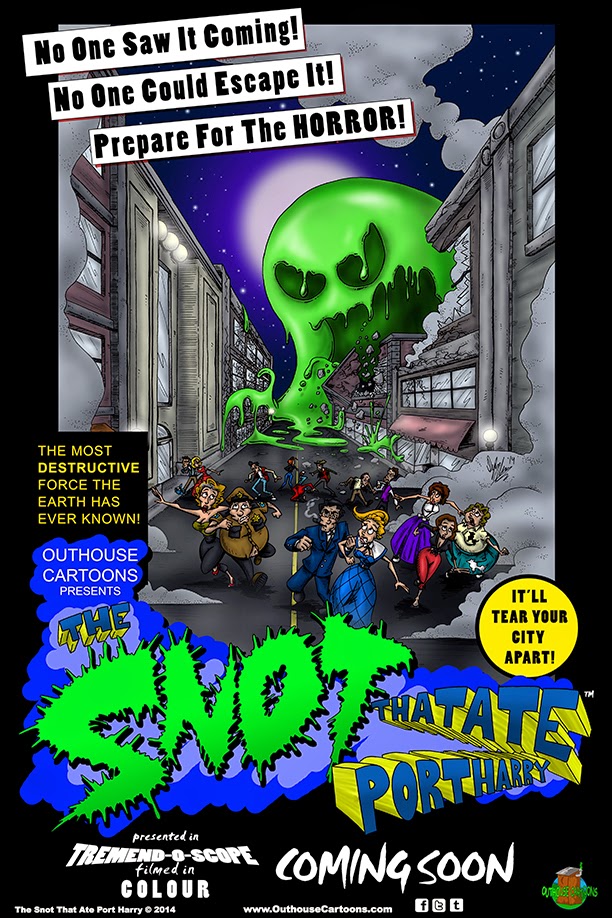 So just where the hell did such a stupid idea for a movie come from?  Snot?  Really?  Well I'll tell you.  The idea started just with a title.  Which was said as a joke.  And to hear that joke for the first time you'd have to go back to somewhere in the vicinity of the late 1980's or early 1990's to a much younger version of me.

I grew up on movie dinners.  When my parents got a VCR a few years before I was born my dad would pretty much record every movie that came on TV.  We even had a video store that was only a five minute walk from the house, which lead to more movies to watch, more movies to record, and our library was growing all the time.  Videos, by the way kids, are black plastic rectangles that show motion pictures...VCR's are big clunky machines that play them.  Growing up I could also count on at least a couple movie dinners a week, a dinner that would be eaten on the couch, off the coffee table in front of a movie.  We watched all the stuff any kid born in 1984 would watch, Goonies, Gremlins, Indiana Jones, Back to the Future, Star Wars of course, the Christopher Reeves Superman, the Michael Keaton Batman.  And I may have watched Terminator and Robocop a little earlier than most kids would.  The guy that fell in the toxic waste?  He freaked me out.  But it wasn't just those movies.  I was introduced to Peter Sellers with the Pink Panther and the Party.  Abbott and Costello when they met Frankenstein and everybody else.  We watched Airplane, Vacation, Blazing Saddles, King Kong-the original one, Arsenic and Old Lace, Harvey, Topper, and any Ray Harryhausen movie that was on TV.  These were the gateway drugs that lead me to become a movie buff, and then eventually, clinically movie obsessed.

As a kid I learned pretty fast what meals would signal a night in front of a movie.  Pizza and tacos were the most common, sometimes their half bred cousin, Mexican pizza.  That's a tortilla lying flat with taco meat and cheese on top for those of you keeping score.  There were other movie meals too, and depending on the time of year a burger usually meant a movie as well.  Did I mention we watched a lot of movies?  So when I would notice one of said meals being prepared...or ordered...the question would invariable leave my mouth, "what movie are we watching?"  And the answer, on more than several occasions, would leave my dad's, "The Snot That Ate Port Moody."

The vision of what surely would have to be a giant wad of snot devouring a town was pretty funny to single digit aged me, and that imagery combined with the sheer frequency of the joke stuck to my brain like glue.  Years later, in 9th grade I even remember drawing a would be movie poster in my sketchbook for "The Snot that Ate Port Moody."  A drawing that I never actually finished cuz it wasn't living up the vision in my head(shoddy composition, questionable perspective). 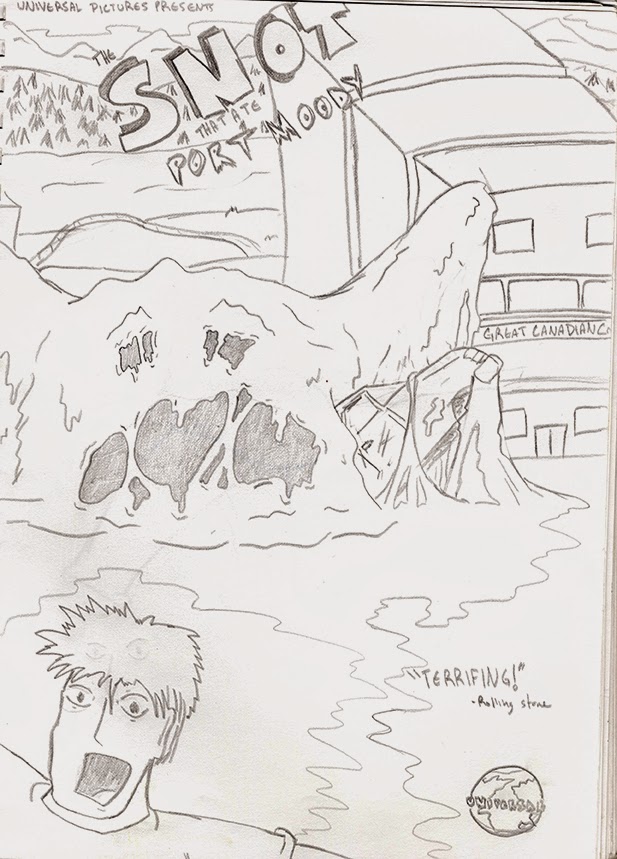 Flash forward a bunch more years to 2008 when I'm working on an animated movie called, "The Case of the Midnight Murderer."  Midnight Murderer was a short story I had written years prior and on a whim I turned it into a script, which then snowballed into character designs and eventually a finished movie.  I was in the early stages of that project, a love letter to film-noir movies of the 40's when "The Snot That Ate Port Moody" came to mind again, only this time with a little better context.  As ridiculous of a title as "The Snot That Ate Port Moody" is, it would not have seemed so out of place in a drive-in back in the sci-fi monster craze that spilled out of the 1950's.  If I can do a 40's detective parody loaded with in jokes and references to old mystery movies than maybe "The Snot That Ate Port Harry" (I changed the name to a fictional town) could be done as a 50's B-movie parody.  I started writing notes and doodling sketches but my attention was still on Midnight Murderer.  I wasn't committed at the time to necessarily see Snot through to the end but when I saw the finished version of Midnight Murderer that kinda changed.  I have a hard time watching Midnight Murderer, my first feature length movie, without picking it apart.  There's nothing in it, not a stage of production that I wouldn't do at least a little bit differently on a second run.  My cavalier attitude during the development stages of that movie, to me, stand out.  In spite of all that though, I don't hate what I accomplished.  And with all that I learned making that movie, it seemed like a waste not to make another one.  So I'm chipping away now at "The Snot That Ate Port Harry."  A movie that started as nothing but a title, which started as nothing but a joke.

Animation hasn't started on the movie yet but it'll happen soon.  For regular updates on the movie's progress, including work in progress pictures, concept art, behind the scenes videos and other cool stuff follow the movie on FACEBOOK, TUMBLR, and what the hell, might as well follow me on TWITTER too!
Posted by Dylan at 09:52 No comments: