So a month or so ago I posted a drawing I did of the Bro Jake Show.  Turns out they liked it, Alece from the show got in touch with me and they asked me to add in Nikki Omen, their board guy.  Here's the updated pic. 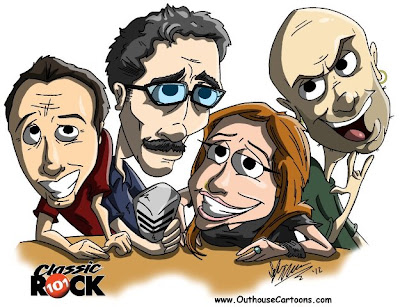 But wait!  That's not all!  There's a reason they wanted this updated...cuz they liked the drawing so much they printed on t-shirts for themselves...check it out! 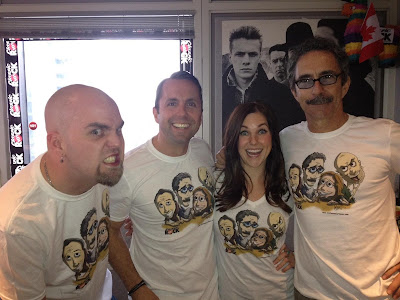 This was cool for all kinds of reasons.  I was pretty stoked to see Outhouse Cartoons tagged in photo on the Bro Jake Show's facebook page.  This...pretty much made my week last week.  Thanks guys!
Posted by Dylan at 17:26 No comments: 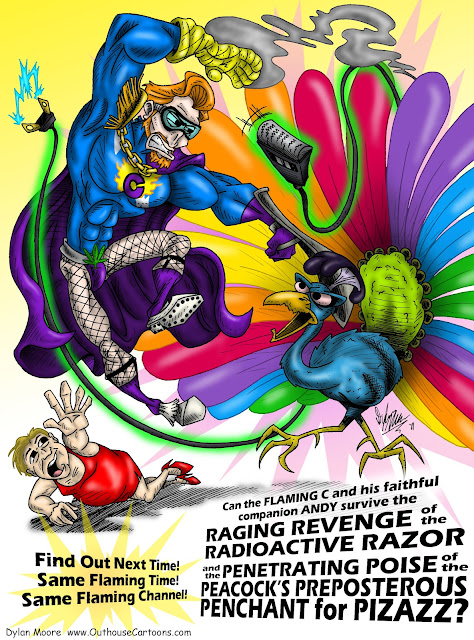 The Flaming C is the superhero alter ego of Conan O'Brien.  He was created by Conan and 'Batman The Animated Series' legend Bruce Timm during a segment on the show last year.  It turned into a regular gag on the show with animated segments and some teases of a Flaming C movie which at this point may just have been a joke.  They put out a call for submissions of fan art for a 'super secret project' so I entered this.
That's an evil NBC peacock if you were wondering...and a Razor that wants to shave Conan's beard.  That super secret project as far as I know turned out to be a gallery at the San Diego Comic Con...and it all wound up on the official Flaming C website in the fan art section.  Mine was mysteriously absent from both locations...don't know what that means.  The site has a lot of stuff, lot of styles and types of artwork...even has a macrame Conan, so I always wondered if they even got my jpeg, but I'm not gonna be that sap who submits the same art more than once.  There's also of course the distinct possibility that they didn't like it...or maybe Andy Richter didn't like that I drew him wearing a mini dress.  I still like the drawing though and Conan's still a pretty awesome guy, so here it is on my own site to show some fandom.  It fits in well at the Outhouse.
Posted by Dylan at 15:35 No comments:

I bought 'Teenaged Mutant Ninja Turtles' on DVD last month because I'm awesome that way.  Like any healthy male product of the 80's I was obsessed with that show growing up and that first movie is still pretty cool if you ask me.  After I watched it I drew this... 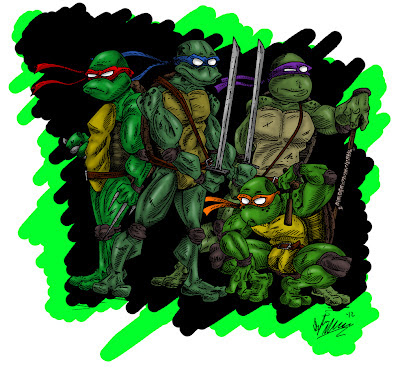 This isn't a bad drawing but I thought I could do better.  It's more or less the classic turtle design drawn in my style.  I wanted to mix it up a bit so I did some more sketching and played with the proportions to make them stubbier and a little less anthropomorphized...a bit closer to the original Eastman and Laird drawings. 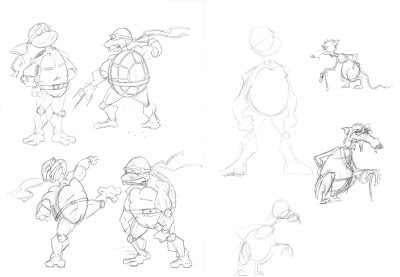 I ended up doing a whole character line and added Splinter, April and Casey.  In the original comics(which I've never read) April was actually a lab assistant or something, not a reporter like in the cartoon and movies...so I split the difference and drew her in street clothes, note the yellow jacket though.

Apparently in the new Michael Bay produced movie that they're working on they've decided to make the Turtles aliens instead of mutants.  There's an expression for that, I can't remember exactly how it goes but I think it rhymes with 'DUCKING MUPID.'  I have an unrelated movie suggestion myself though...I think Bebop and Rocksteady would be great in that new 'Gone With The Wind' remake I'm sure somebody wants to make.  Don't you think so?
Posted by Dylan at 01:40 No comments:

Night of the Living Commission

Here's a drawing that Caillin Buck hired me to do. 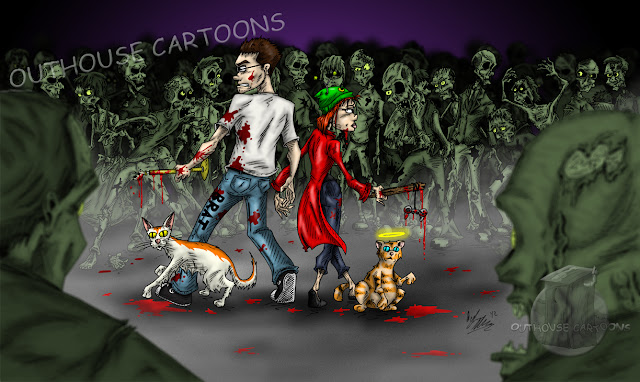 See the watermarks?  That means it's his, so back off.  The concept was all Caillin's.  He gave me specs on the characters and their outfits and a couple photos of the cats that these ones are based on.  I designed the Zombies totally from scratch but the composition is more or less his too.  It was a fun gig.  I invented the weapons though.  See the girl's stick with a playstation controller tied to it?  I'm proud of that and fully intend to build a working prototype for the pending zombie apocalypse.  You and me both know it's coming, it's only a matter of time.
Posted by Dylan at 22:13 No comments:

The Evolution of James Dashiell

Here's a partial turn-around of James Dashiell, the main character in "The Case of the Midnight Murderer." 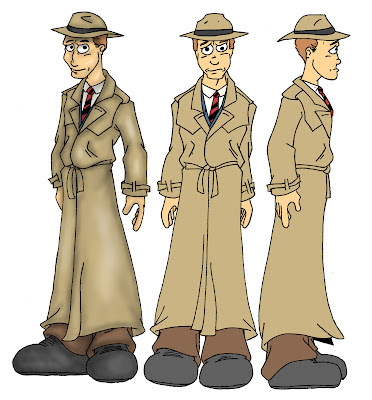 I refined the character a bit more as I got him Flash/animation ready but this is more or less the final design.  Dash is a private dick, he's new to the game and doesn't really know his way around a magnifying glass yet.  He spends a lot of time trying to act tougher and cooler than he really is, spouting out hokey lines of gibberish that probably sound quite eloquent and profound in his head.  His posture in the turn-around is somewhere in between his cocky showmanship and his less self confident true self.  This isn't always how he looked though.  Here's the first drawing I have of him from back when I was like 14...

GAH!!!!  That's horrible!  His feet looks like hooves and I can only assume his shins were broken for some reason.  Maybe he welched on a gambling debt that I forgot to write about.  "The Case of the Midnight Murderer," was a short story I wrote in highschool...I actually wrote a series of them but Midnight Murderer was the only one that's still any good.  It wasn't until several years later that I thought there might be potential in adapting it into a movie.  That's when I drew this next incarnation. 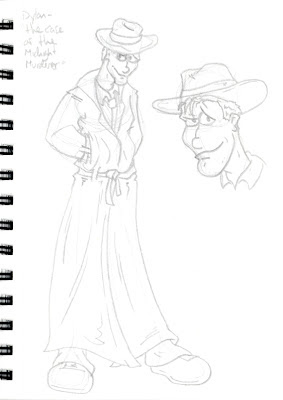 This is a much better drawing but at this point I hadn't even written the script yet and was still deciding on the approach I wanted to take with the whole thing.  I ultimately decided I wanted it to fall somewhere between this more cartoony version and a more comic bookish type of style that would fit into the stark film noir shadows I wanted to populate the movie with.  Here's some sketches from his development into the movie version. 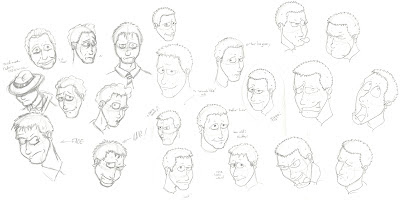 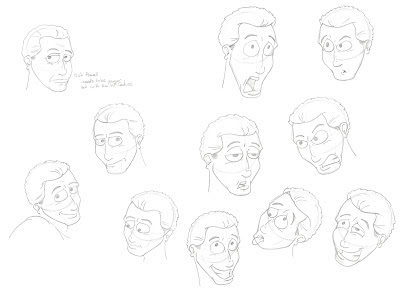 Every character in the film is in some way modeled physically on an actor from the 40's.  I essentially cast the movie like I was a 1940's movie mogul who could afford any actor he wanted.  The end result of each character doesn't necessarily resemble the actor that much though.  It was just a jumping off point to get me started and in the end all that mattered was that I liked the look of the character.  Dash sort of fell through the cracks though in that way.  He tries to act like Humphrey Bogart but he's not very good at it, he's a lot younger than Bogie was in these movies and should maybe even look a little baby faced.  I looked a lot at Dick Powell...he was also too old but he was as much known for playing hard broiled gumshoes as he was singing and dancing in musicals, so he had the goofball quality to counter balance the tough guy.  In the end, Dash looks like a vague amalgam of Powell and Bogart who's had a face lift to look several years younger.  I'm also told he looks a bit like me and I can't fully argue that.  Here're some early drawings of his outfits...I don't know why I drew his legs so long in these. 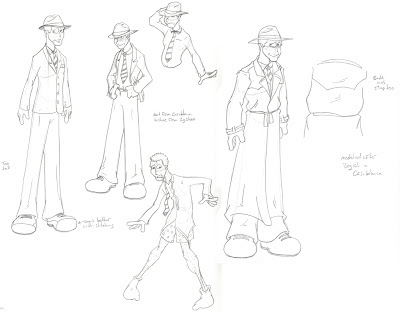 I have a lot more clothing sketches.  I watched a lot of old movies with a clipboard in hand and just drew stuff that I thought looked cool, so a lot of Dash's earlier outfits are mixed in with everyone else.  His trenchcoat is based pretty closely on Bogie's coat in Casablanca.  It had a lot of layers and flaps and stuff which I thought made it a lot more interesting than most of the other coats I looked at in my research.  He wears that coat for the lion's share of the movie so I thought it better look interesting.  Here's some really bad drawings I did for a quick and dirty colour test. 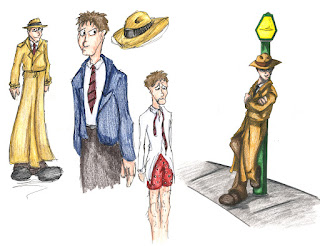 The movie was always intended to be in black and white but I wanted to have some idea of colour early on to help in defining the gray tones.  I literally just scribbled down the line work with a Uniball and did some quick pencil crayon colouring.  Next up we've got some action poses! 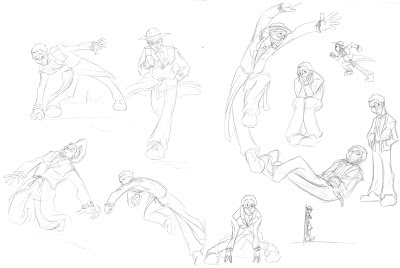 Nothing much to say about these really...just an opportunity to make sure he'd look good doing the stuff he needed to do.  Down below is one of many fully rendered pencil concept drawings.  I just posted a whole whack of concept art over on the "The Case of the Midnight Murderer" Facebook page.  If you haven't already liked that page I recommend you do...I post stuff like this on there once in a while that I won't necessarily post anywhere else and with any luck I'll also have updates on festivals and opportunities to see the film in the coming months. 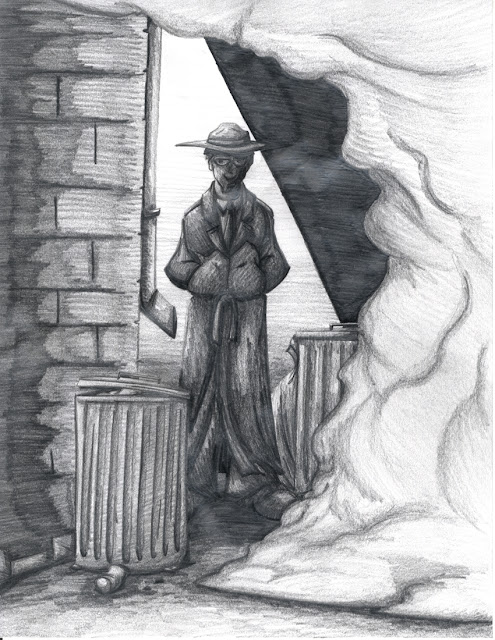 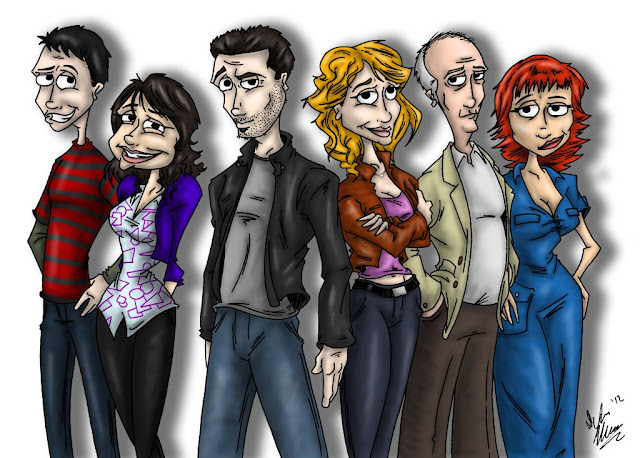 It's a Canadian show, for anyone who doesn't know, about a P.I. in Newfoundland.  This is the cast if it wasn't obvious.  I really like the drawing, but I'm a little so-so on the likenesses.  I think Malachy's bang on and Rose is pretty good.  Tinny's not bad but maybe a little more cartoony compared to the rest of them which makes her look a little younger by comparison maybe.  Still like the drawing though...I'd just be doing some more tweaking before I'd pitch "Republic of Doyle: The Animated Series."  I like that Canadian TV's been getting better respect in the last few years.  I think if you asked about favorite Canadian shows twenty years ago, the response would pretty much start and end with SCTV.  SCTV will forever be a classic(and maybe a future blog post) but I think we have more to add to the list.  Doyle is one of them.  Props to my cousin for introducing it to me.
Posted by Dylan at 16:50 1 comment: