Anyone who knows me knows I'm a HUGE hockey fan!  Okay, actually that may not be entirely true...I am however brimming with local pride and definitely cheer for the Vancouver Canucks every year.  A friend drew a Canucks contest to my attention and I was pretty eager to sign up.  The mission was to draw one of the Canucks' three newbies in pretty much any style you want, I chose Zack Kassian...largely at my friend's behest.  The contest is hosted by Deviant Art which I conveniently already belonged to, you can vote for my picture by clicking HERE and following the instructions.  And you'll have no problem recognizing my entry because here it is right here... 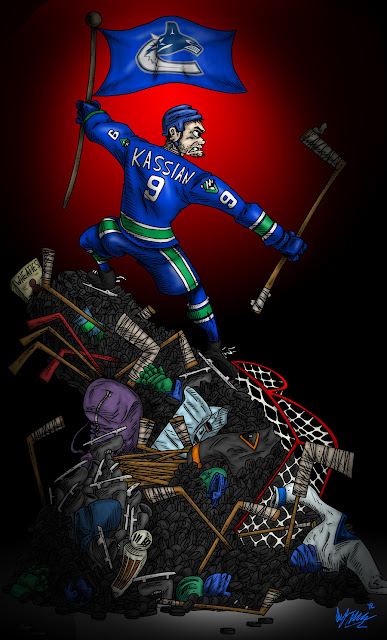 While on the topic of the Canucks I thought I'd also post this drawing right here. 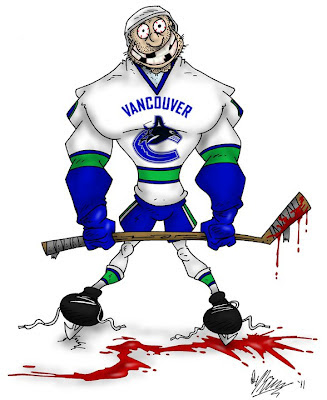 I drew this during the playoffs last year and actually used it as my profile picture on Facebook for a while.  I took it down during the riot...at that moment a bloodied and beaten hockey player didn't quite seem as cool.  I'm over it now though, cuz I think it's a pretty cool drawing.  Go Canucks!!
Posted by Dylan at 14:22 No comments:

So like two months ago I applied to an ad on Craig's list to be a caricaturist for a Samsung event.  I thought maybe it was gonna be a booth at a trade show and maybe the phone had facial recognition or something so they were using caricaturists as a marketing gimmick to draw people to the booth.  Turns out no.  The Samsung Galaxy Note is like an ipad-iphone hybrid with a stylus pen and they wanted me and a bunch of other artists to draw people's faces on the phone itself using an app called Smemo.  We were stationed at traveling booths in malls all around Vancouver.  First was Metrotown, which was craaaaaaazy busy, then was Pacific Centre which was surprisingly dead, then was Park Royal which was somewhere in between.  We were hooked to TV monitors so that Looky Lous could watch us draw and people seemed to think that was pretty cool.  After the first 3 weeks they extended it for a month but this time we were fanned out, each artist was on his own and stationed in stores that sold the Note.  It was an interesting, sometimes fun, sometimes frustrating, and often tiring experience.  Here's some of the stuff I drew on those phones... 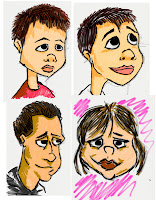 These ones above are some of the first ones I did, before I really figured out the best way to use the drawing tools in Smemo.  Drawing's kind of a neat gimmick but the app isn't really meant for it and you have to figure out the best way to cheat with the options you have.  These were coloured with the pencil tool.  You can't do layers in the program so you have to really focus to keep the colour in the lines.  Kindergarten all over again.  Once I figured out the better way to approach it I started to loosen up and get some better results.

These are randomly picked from the first 3 weeks.  If you use the pencil tool with a light gray colour you can sketch really loosely and get your construction lines down.  Then if you use the highlighter tool with a low opacity you don't have to worry so much about running over the lines and you can build it up by going over certain areas to add shading.  Then you can add your darker lines on top to finish it off.  In Metrotown we had so many people lining up that the phone was struggling to keep up with me, I was drawing so fast.  As I got more comfortable with it I was able to get more cartoony and exaggerated with the faces.  The early ones were a bit more static and realish cuz I was too focused on getting them done to experiment with the proportions.

This was the first one that I was able to go more cartoony with and he didn't even know I was drawing him at first.  He was watching in awe as Sujan, the artist next to me, drew somebody.  I saw his face and immediately had the cartoon version in my mind so I had to draw him.  Eventually he caught on to what I was doing and loved it.  He said he looked like the Pope of Africa and started showing random strangers as they went by.

This was another guy that didn't know I was drawing him.  He came over to ask if I could draw him, saw that I was already half done and couldn't stop laughing.  He was pretty stoked and said he wanted to use it as his passport photo.

This was a creepy, drunk teenager that was hassling the girls at the booth in Park Royal.  I drew him accordingly.

Here's a couple couples.  I did a lot of them. 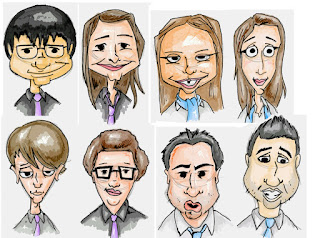 Whenever I was stationed on my own in a store it was really dead and I rarely ever had anyone ask for their drawing.  So sometimes I just drew their staff...sometimes they didn't even know it till I was done. 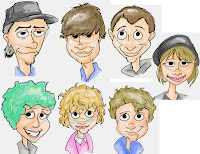 My second to last week was at the Vancouver Celtic Festival.  I was really popular there and unfortunately didn't have time to email myself very many drawings at all. 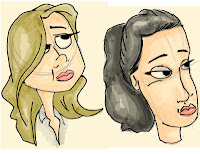 My last day was in a store in Coquitlam and it was really dead.  I drew Ellen Pompeo and Sandra Oh from a Gray's Anatomy still in a BellTV poster in the store. 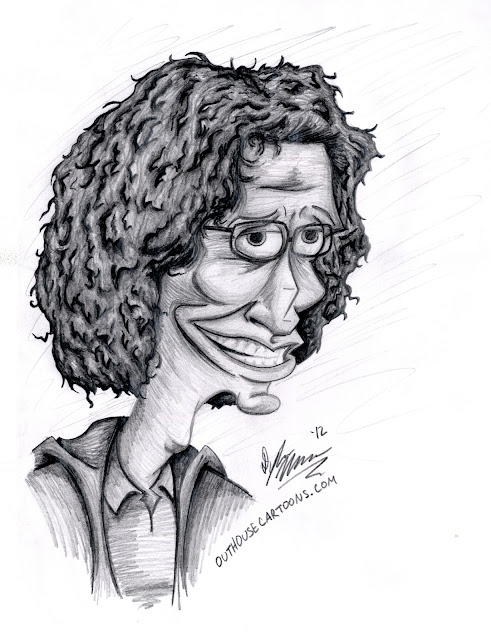 After drawing The Bro Jake Show a couple weeks ago I thought I should do a caricature of the other DJ I listen to regularly.  For this one I decided to do another pencil rendered one, I don't think it turned out as well as my Vincent Price one I while ago but it's not bad, he's weird looking, maybe even a little creepy but that's not necessarily a bad thing in caricature.  Stern's the self described 'King of All Media,' now he's a penciled cartoon...this probably isn't the first time though.
Posted by Dylan at 09:30 No comments: 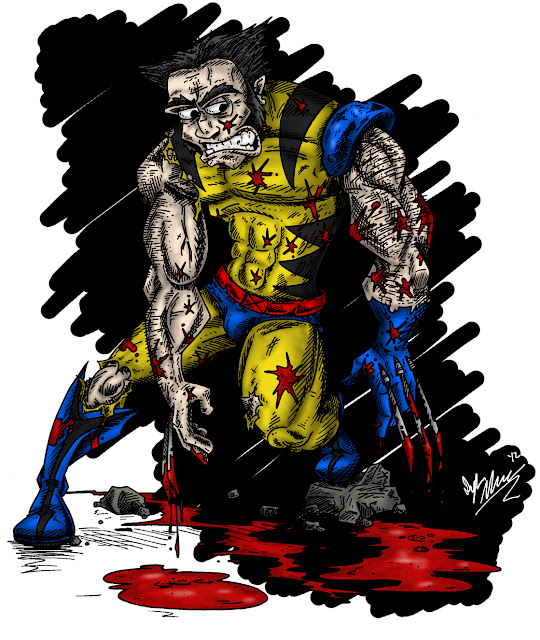 Here's Wolverine after what I imagine was a bloody good time.  Hoho, haha, get it?  Cuz he's--ahem, moving on.  No real reason for drawing this other than I felt like drawing Wolverine so I drew Wolverine.  I like it, kinda cartoony but kinda bad ass too.
Posted by Dylan at 15:15 No comments:

Wicked Witch of the West 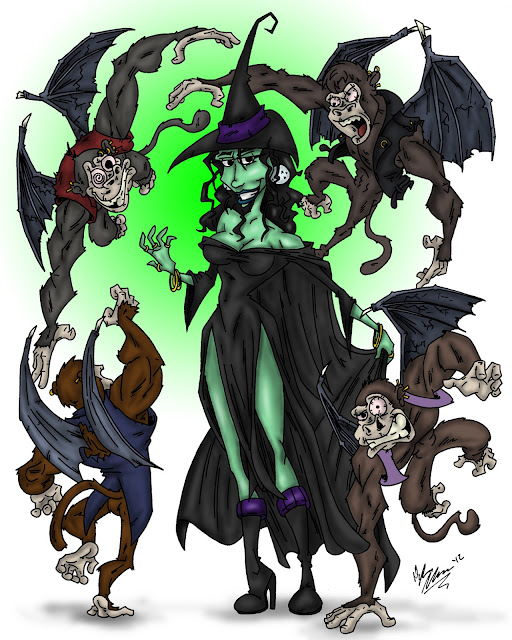 Apparently whenever a new twisted take on a classic fantasy story is drawn the female characters have to be really hot.  I don't know if I fully follow the logic but I'm happy to play by the rules.  Here's the Wicked Witch of the West, if you don't know what story she's from there's probably no hope left for you.  This started with some ideas for the flying monkeys and I really like how they turned out.  The witch is missing something though, it's kind of a bland pose and maybe that's it but I feel like I could've done something more with her.  Maybe I'll take another stab at it one day.
Posted by Dylan at 13:34 No comments: