I've been keeping pretty busy.  Did a few animated commissions for a webseries called Beverly Hoodz, check them out here if you want.  I'm tapped to animate a few more from that series too, so keep your eyes open for that.

I'm also teaching more at Vancouver Film School.  I'd already been teaching two levels of Flash for about a year and a half but in July I took on some more classes.  Now I also teach Classical Animation, Storyboarding and Comic Book Production.  That's been a lot of fun and you'd be amazed how much I love putting together power point presentations for lectures and gathering film clips for examples.  I'm a movie/cartoon/comic nerd after all.   In addition to all that my free time has been largely eaten up by my graphic novel.  Did I mention I'm doing a graphic novel?  Oh ya, I'm doing a graphic novel.  Check out some in progress shots of it on my Facebook page, here.  While you're at it, like my Facebook page too if you haven't already.  And hey, if you're on Twitter follow me there too, I post in progress pictures there quite often.  The graphic novel is almost done now but it took a lot longer than anticipated.  Started it in June and thought I'd be finished, colour and all, by the fall.  That turned out to be a pipe dream.  I was using how fast I draw Cowman comics as my guideline to estimate my timing but the truth is this novel gets a lot more elaborate in a lot of ways and I can't pump the pages out as fast as Cowman.  I'm not sure yet if I'll be getting a real publisher or if I'll be putting it out in some form myself but the story is semi-seasonal so it'll be a while before it's made available no matter how I go about it.  I will put out some official finished images to wet your whistle when it's all done though.
Hmm...what's next?  Here're some random drawings from the last few months.

Doing more random drawings is my only real New Years resolution.  It might not be an easy one cuz I am planning on diving into another ambitious project this year but I'll definitely be making an effort.  Speaking of ambitious projects.  Remember Pork Cops?  I posted about it a while back.  I finished it earlier in 2013 but set it aside so I could come back with fresh eyes and recut it to make it move a little faster.  Also might've made some changes to the sound mix cuz there are one or two questionable sound effects.  Long story short my computer died and I lost all my original working files so I couldn't edit it like I wanted.  So instead I just posted it as is on youtube.  In hindsight I'm actually still pretty happy with it but I definitely would've made some adjustments given the opportunity.  Check it out here!  Right here.  Now at this very spot!


One last thing.  Cowman is still going with new comics every Tuesday and Thursday.  In fact I just finished an epic story arc called "The Foolery Saga."  Here's the promo. 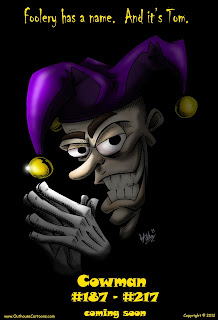 Cowman is now also on Tumblr too.  I'm playing catch up over there now so I'm posting daily until it catches up to it's current run and then it'll update Tuesdays and Thursdays just like Blogger.  I took a hiatus though for the holidays so I'll start posting daily again on January 6th with Cowman #187.  You astute individuals may notice that that is the first Cowman listed on the above promo for the Foolery Saga.  In other words if you want to check that out then heading on over to Cowman's Tumblr page and subscribing might be a damn good idea.  Or if not go to his Blogger page and get caught up there.

So that's it for me for now, and didn't even really cover everything.  I'll try to update more often again so I don't have to write a novel for my next update just to cover it all.  Later guys.
Posted by Dylan at 14:29